In 2011, David Hendrickson founded Hendrick Boards, a skateboard and apparel company devoted to raising awareness about animal causes. He began the company after rescuing William, a Chihuahua-mix who had been poisoned and was only expected to live a few months. Almost six now, William needs regular procedures but he’s still wagging his tail and inspiring David to sell eco-friendly products, to donate to shelters, and to get more people involved.

And more people have. The television show Glee featured Hendrick Boards in an episode this year, and the company has already gained worldwide recognition, selling products overseas. This humbles David, and he says, “Amazing to think people in Japan are wearing a Hendrick Board shirt with my dog on it just to help.”

Chicago Dog Walkers is privileged to bring you an interview with David.

Congratulations on your one-year anniversary. Pairing skateboards with animals to raise pet awareness is a unique but seemingly odd concept that you have made work. Why do you think this coupling has been successful?

I really think it’s the story we have. My dog is my best friend in the world and being able share his story and show people these animals that are tossed aside a lot, we’re able to save animals, give animals like William a voice. They should be heard. We should save them.

Aside from skateboarding, William’s story initially drew me to your company. He’s ingrained in your website.

He’s the reason I’m here. I’m not here because I did anything. I’m here because seeing his strength. Going through this crazy process with William, this journey, surgery after surgery, touch and go for three years straight. If this little dog, this little six-pound poisoned dog has the strength to make it, then we have the strength to do something about it. 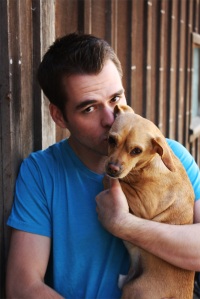 Why sell skateboard and clothing products instead of pet care products to help animals?

The real reason behind choosing skateboarding, longboarding was: let’s not only give animals a voice, let’s give a whole new crowd of these younger skateboarding kids, that, just like the animals, a lot of people write them off. But they do care, and they’re young and ambitious. And through our boards we’re able to show them that through their sport they can also have a cause. That’s where I really see the power behind Hendrick Boards too, is opening up this whole new group to saving animals and connecting them with their local nonprofit.

Has anyone told you they started skateboarding because of your brand and cause?

I have had older people say they’ve gotten back into it because of Hendrick Boards. One of the guys longboards with his puppy. I love seeing that. It’s so cool seeing people getting back into it simply because we help animals.

I’m sure I can guess this one, but has anyone told you they adopted a pet because of your brand and cause?

[laughs] Definitely. It’s not about just coming and buying a skateboard or t-shirt. That’s not our goal. Our goal is to connect people with their local nonprofit. Not only connecting people. Educating them and getting them to adopt. That’s our ultimate goal. To take these animals out of the shelters.

In an interview with the Examiner, you mention that customers were willing to contribute to your cause despite a difficult economy in 2011. Has this remained the same or has 2012’s economy posed new challenges?

Being a new company we’re always going to have challenges. The thing that is unique about us is it does make people want to buy our product. It’s not only that we give back but we give back in pretty big ways. It’s pretty rare that you can find anywhere that donates ten dollars from every t-shirt [to shelters]. These are things that people are normally going to buy anyways.

Do customers choose which shelter their contributions go to or are there specific ones working with you?

What we do is we create partnerships with nonprofits across the US. Based on shipping addresses we would connect [customers] with their local nonprofit. We’re working with over 150 nonprofits across the US, but we’re always getting people suggesting their favorite, their local, the ones they know. Ninety percent of it is us connecting them with their nonprofit. We’re getting a new crowd, the young people. They know about animal causes, and about shelters but not about the fight that local rescues have to go through every day.

From what I understand you do not have a brick and mortar store. Why stick to online sales?

We’re in retail stores, a few retail skate shops. Breaking into retail is something we’re working into. It’s nothing we want to jump into as a new company. Needs to be a step in the right direction. None of our donations will ever go down. We’re always going to donate this much no matter what. If retail doesn’t fit that, we’re not going to do it.

That’s respectable. Also respectable is your goal to save 10,000 shelter animals by the end of 2012. How close are you to achieving this?

We’re probably close to halfway there. This month will be our biggest month ever in donations. We have some amazing partnerships coming up with some huge people. Not only big names but big organizations. We have one with Animals Asia who is actually fighting bear farming in Asia and all across Europe. We’ve created a special line just for them dedicated to their fight against bear farming. We’re introducing people in the states who didn’t even know. We’re introducing them to a new animal cause.

Besides your website and social media, how do you promote the brand?

We do events with local nonprofits. I volunteer every weekend with a local nonprofit and we blog about it. A lot of it’s organically. Like anyone else finding us they happen to stumble upon us.

The show Glee featured Hendrick Boards on their 2012 spring premiere. How did this come about?

One of their people on set heard about us and told the prop master about us and it just kind of worked its way up. FOX contacted me literally a week before the show was going to air and said they had another company in mind, but they really wanted to use us because we’re a young company, because our ideas and our morals as a company fit Glee. In a little less than four or five days I had to make twenty-three custom skateboards for Glee and eighty shirts and stickers. The whole nine yards, everything. Obviously the pay off was worth it. We’ve been such huge fans. We got to meet the cast. We had all the guys riding our skateboards around the set.

What was the first thing you did when you learned this news?

[laughs] Called my mom. She started crying. I’m a huge momma’s boy, so the first thing I did was call my mom. Then I called my brothers.

What’s the best way for people to contact you?

Facebook. I’m huge on our social media. We do all this ourselves. Say hi on our boards or message us. We respond to every single comment. People can sign up for a newsletter on our website. We try to do one every couple weeks. It doesn’t always happen because we’re doing a million other things, but you can sign up for our newsletter.

David with brothers and co-founders Darren and Donny.

Matt Athanasiou writes poetry, nonfiction, scripts, love letters, notes, random words, and fiction, mostly fiction. You can read more about his words on his blog There Was a Matt and follow him on Twitter @mattisnotscary.