Our second part in the series, we’re moving away from live-action doggies and focusing on cartoon and comic book canines. While living dogs inspire and entertain us, fictional dogs open our imaginations and often make us wonder about our dogs’ secret lives. 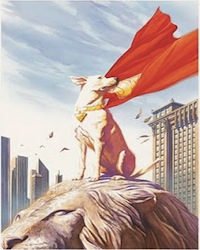 Why he makes our list: Just being Superman’s dog earns him a spot on this list, but super smell, super hearing, and super vision help. First appearing in the mid 1950s, Krypto literally soars onto the pages of Adventure Comics and chews a steal gun like it is plastic. And are we the only ones excited about walking a flying dog? Forget busy sidewalks and dangerous intersections. Plus, he wears a cool cape. 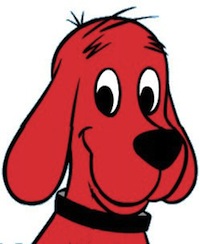 Why he makes our list: Norman Bridwell understood the gifts that come from a devoted relationship between dogs and humans. The relationship between Bridwell’s characters Clifford and his owner, Emily, proves this. Emily chooses Clifford, runt of the litter, on her birthday, and the affection she shows him helps him grow and grow and grow into a towering pooch. Although his size can be intimidating, and the danger of him bounding onto a house is high, we would risk owning him for the chance to climb him and snuggle.

Notable moment: Clifford helps a little dog, Frankie, feel less insecure about his petite size, by telling Frankie that small dogs can hide better and can get into smaller places. All dogs need love, despite their size.

Why he makes our list: The long running gag of Garfield shoving Odie off the table might have you believe Odie is a pushover, but he is actually tempered and intelligent. What other dog can take insults and abuse from a fat orange cat and find it in himself to refrain from eating that cat? An optimist at heart, he has even been caught reading Tolstoy and listening to orchestra. Also, his tongue is never-ending. That means he doesn’t have to jump on you to give you kisses.

Notable moment: Proving he is smarter than Garfield believes, he empties his owner’s, Jon’s, closet of all his clothes except for a single shirt that says Jon loves his cat. Garfield is blamed and tossed outside; Odie laughs at him through the window while wearing Jon’s clothes.

Why he makes our list: As Joe Cool, Snoopy wears sunglasses and acts nonchalant; as the Flying Ace, Snoopy pretends to fly his doghouse and have plane fights. Snoopy’s alter egos are one of his biggest appeals. Whether he imagines playing tennis or acting as an attorney, he gives us ideas of what our pooches dream about when they’re waiting for us to play with them. We also wish all dogs had a little yellow bird to pal around with, like Snoopy does with Woodstock.

Notable moment: Charlie Brown makes fun of Snoopy for hiding in his bed from things that go bump in the night. Charlie Brown begins telling Snoopy that he’s not afraid of things in the dark and Snoopy shouts, scaring Charlie Brown out of bed.

Why he makes our list: We love rescued pets, and that’s exactly what Santa’s Little Helper is. Bart and Homer save him from living on the streets, when Santa’s original owner tries abandoning the dog for losing at the racetrack. He has an inordinate amount of energy and likes to chew on most things. His life is far from dull, as he has been a police a dog, a mascot, an ostrich farm dog, and father. All this and he still just wants to play fetch.